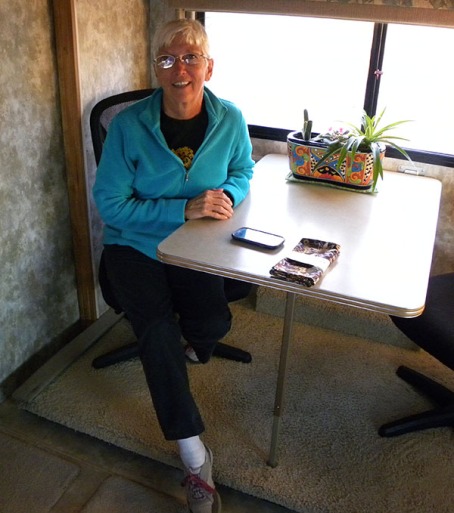 When the very worst thing that can happen to a couple happens, Carol Logan created a new life for herself. It started 10 years ago when her husband of 41 years passed away. While going through the grieving process and trying to find a way to move forward without him, she had a dream one night. Her thoughts had been troubled and confused before the dream but, she believed it was a clear sign to move on in her own way. The dream basically told Carol she should be a full time RV camper.

Though many family and friends thought it was not such a good idea and were worried she would be in danger by herself traveling the country; this independent, very strong woman set about learning how to do it. She needed to know how to drive the RV and set it up at the campground, how to hook up and tow her car and just how to make the experience comfortable, safe and have a workable plan. With a little help from her friends, she succeeded in learning and more important doing it. She has been on the road for more than 5 1/2 years years now.

She had never done that before though her resume is interesting with so much variety. This talented woman could probably do anything she wished to do. She had been an appraiser in the past. Carol had worked for 18 years at Red Lobster and taught servers and managers. She even owned her own restaurant in Dallas. She worked as a hairdresser. Her colorful background included a stint as assistant to TV clown, Patches when she lived in Fairbanks, Alaska.

Her talents also include sewing. After a time had passed and she still was not sure what to do for the loneliness and emptiness of her new life. She became ‘restless and bored’ according to Carol. Her daughter suggested she sew napkins again and so she made tons of those and sold them in order to support many animal rescues. After a time she added potholders too. All the profits went to many charities for animals that needed rescuing and help.

Carol said to herself, “It’s nice to do this for animals but, what about the kids?”

That sparked a new idea for a craft. Carol insisted, “I wanted something to make kids smile.”

In the past, she has made stuffed snakes for doctors to pin on their coat and pretend they don’t know they are there. Carol said this has resulted in “children laughing and smiling” when they may have been sad or scared when medical visits were needed.

Her latest craft was to create stuffed toys for little hands. They are like dolls and she calls them Huggers. Carol speaking of these colorful toys reminds us that “every one has a great big smile.” She wanted to put them in the hands of children who needed emergency care or were hospitalized. Her hope was it might make these trying times easier for children. 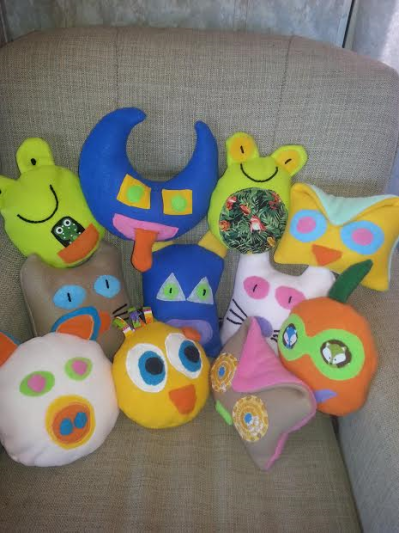 The Huggers . Photo by Carol Logan.

She takes a bag of them to the facilities and looks for a nursing supervisor. She asks “Can you use these?” The first of last year she decided to create one a day for the whole year. She said she needed a small break after 300 were done but, got right back to it and even exceeded her goal. So far she has created 370 of them. She says she has put them in facilities in 6 different states. When I interviewed her she had four additional stops to make on her way to Colorado. To date she has created and dropped off Huggers at 36 hospitals, 4 victim’s advocates facilities, 2 sheriff departments and 1 ambulance department. She has not revealed what next year’s project will be but, you can be sure it will be a work of love.

This lady from Vermont showed us another example of strong, independent camping women with a heart of gold. Carol Logan sure has the Christmas spirit. Hope you caught some of that from her!